If you haven’t heard of this book here is what is written on the back:

“What is Jesus worth to you?

It’s easy for American Christians to forget how Jesus said his followers would actually live, what their new lifestyle would actually look like. They would, he said, leave behind security, money, convenience, even family for him. They would abandon everything for the gospel. They would take up their crosses daily…

But who do you know who lives like that? Do you?” 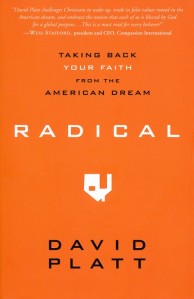 The book was published in 2010 so many of you may have read it by now but I just finished going through it with a small group and I wanted to do a mini-review on it.  I am going to give my thoughts on both the book and the video series that goes along with it because we read/watched both of them in the group.

I loved it.  The book makes a lot of good points (although he does repeat himself a few times) that I think are very good and thought provoking.  My post from a few weeks ago about our response to the homeless was from something I read in the book that got me thinking.  Overall, it wrestles with the idea that being a follower of Jesus Christ is a big decision, one that should ultimately change your life in a huge way yet there are tons of people who say they are christians but look no different.  Pretty good and challenging stuff.  It’s also an easy read.  It will go by quickly and isn’t something that will be hard for you to understand.

I hated it.  You might be wondering how I can hate the video series since it is based on the book that I loved and trust me, I was wondering the same thing each and every week.  Part of it is I just really did not like his delivery and speaking style.  David Platt is a good writer, but he turned me away as a public speaker.  Also, the video doesn’t exactly line up with the book so sometimes I felt like the weeks didn’t really go together.

Overall I would recommend the book to people.  As I said, it is a quick and easy read but it also touches on subjects that are very important.  It will challenge you to look at your life and say “am I really following Jesus with everything”?  But don’t watch the video series, you’ll waste your time.

Recently I was presented with the question of what the proper response should be from Christians when dealing with the poor, specifically when you come across a homeless person who is asking for money.  I personally don’t give them money for two reasons.  1) I honestly don’t usually have cash on me to give away.  We live in a world where people rarely have cash on them.  2) Our society has perpetuated the thought that homeless people will use that money in the wrong way (drugs, alcohol, gambling, etc…) and we are told that it would be best to make donations to local charities or soup kitchens that will use the money responsibly.

But Jesus doesn’t tell us to help those by donating to a large soup kitchen that will in turn help some of the poor.  Jesus calls us to help the poor directly.  Jesus says that anyone who helps the least of these is helping him.  Proverbs 21:13 also says that if “a man shuts his ear to the cry of the poor, he too will cry out and not be answered”.  Those are powerful (and scary) words.  So what should our response be when we drive by someone holding a sign for money?

So what is your personal response to homeless people and why?  I’m still wrestling with how I can care more for the homeless and would love to hear how other people approach the issue.

It’s not too often that we get positive messages from rappers and pop music.  The radio recently has consisted of blurred lines, twerking butts and EDM club grinding tracks.  These songs are great to dance to (except Blurred Lines, I hate that song) and are fun, but not exactly morally good songs.  So I was surprised when I read about the new tour from Kanye West including a Christ figure with a surprisingly positive message and also when I turned on the radio yesterday morning and heard a great song from Katy Perry.

Kanye West is no stranger to controversy.  With his album name (Yeezus) causing many people to be offended and a twitter feud with Jimmy Kimmel over an interview he did many would not have expected this on his recent tour.  Kanye’s Yeezus tour features his entire Yeezus album being performed live and many more.  The lyrics are definitely explicit, but near the end of the concert a Christ figure walks out and dialogues with Kanye.  You can watch the clip here, but be prepared for some language.

Wow.  That is one of the last things I would’ve expected from a Kanye show.  And then following up this skit we get Kanye’s song “Jesus Walks” which also has some very good messages.  I’m not saying that Kanye is going out bringing thousands of people to Christianity, but I bet throughout all of his shows some people may hear a message they’ve never heard before.  Who knows.

And then we have Katy Perry.  She doesn’t have nearly as many explicit songs as Kanye does, but she does have a few.  But she also has very uplifting songs such as “Firework”.  So when I turned my radio on yesterday and it came in on the chorus of her new song “Unconditionally” I was really pleased to hear this on the radio.

Clearly she is singing to another person.  The first verse kind of gives that away.  But this could easily be a song from God to you.  The chorus and the second verse really give that feeling.

If this album is anything like Perry’s last, we can expect to hear this song on the radio for the next year or so and I’d be okay with this. 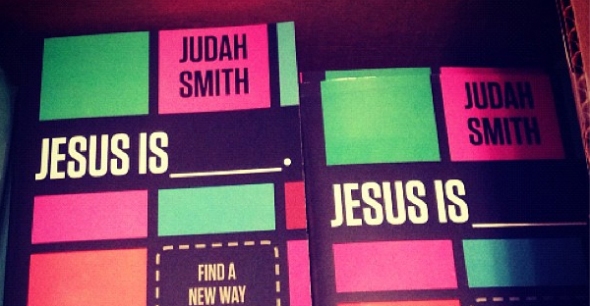 I just finished reading the book “Jesus Is _____” by Judah Smith, a pastor from Seattle.  I originally started reading the book thanks to Justin Bieber.  Since I work with youth and his endorsement sent the book flying off shelves I decided I should give it a read.  Since then I have been hearing and seeing a lot of the author, Judah Smith, all over the place.  Judah Smith was a speaker at Passion 2013 conference in Atlanta, he did a recorded video/prayer that is played before the Rock & Worship Roadshow each night and is getting interviewed in Relevant magazine.  Ironically, Relevant magazine recently did an article on “Christian Celebrity”.  You can decide if Judah fits into that or not, I’m just giving my thoughts on his book.

I really enjoyed the book.  It was a fairly quick read.  I cracked the majority of it out over a weekend trip to Oregon.  So if you are worried that it will take a long time or whatever that is definitely not an issue with this book.

The premise of the book is to shed a new light on the person of Jesus.  There are six main sections of the book with the sentence of “Jesus Is ____” being answered.  Jesus is your friend, Jesus is grace, Jesus is the point, Jesus is happy, Jesus is here and Jesus is alive.  Within each of those categories there are 2-3 chapters on the matter.  My personal favorite section was Jesus is grace.

“When we see Jesus face-to-face, sin is going to be the furthest thing from our minds.  All we will be thinking about is his grace and love and how happy we are to be in his arms.
When we make up rules because we are afraid people will sin, we end up doing an end run around faith.  It’s not fear that saves us — it’s faith.  Fear of failure has a sneaky way of becoming a self-fulfilling prophecy.  We focus so much on what we don’t want to do that we are drawn to it like a moth to a flame.  Or like a mosquito to a bug zapper, since its the twenty-first century now.
Make rules and follow rules as needed, but don’t focus on rules.  Focus on faith.  Focus on grace.  Focus on Jesus.”

The book has a good mixture of important theology on the person of Jesus Christ and a sense of humor that I really appreciated.  Overall, I would recommend the book to people.  Like I said before, it’s an easy read and the content is very good.  Hopefully the half a million teenage girls who bought it because Justin Bieber recommended it actually take in what they read rather than thinking “OMG I’m reading the same book as Justin!!!!!!! ❤ #Believe”

I had to change @leahmnewton’s board to the most beautiful lyric I’ve ever heard. 🐯🐅
Day date ❤️
A few days on the Carnival Dream 👌🏼